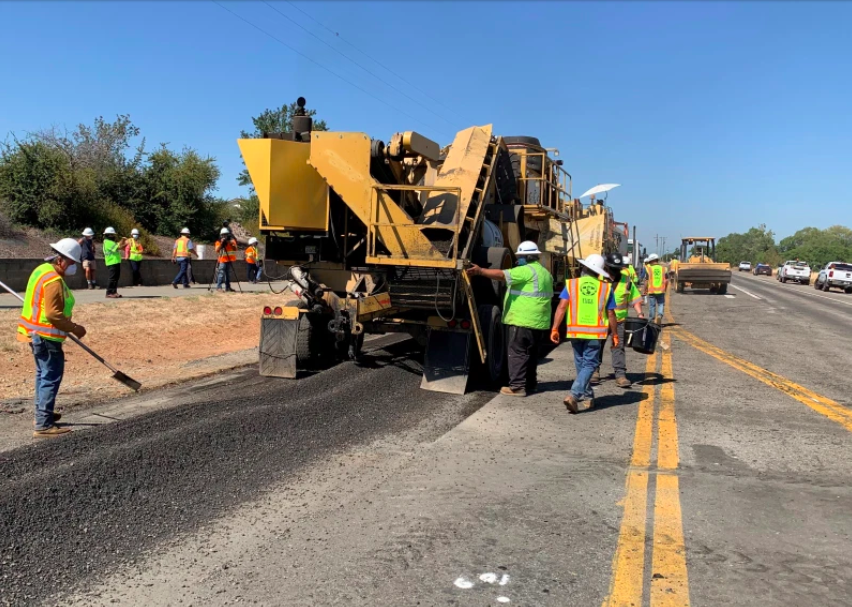 Think of it as where the root beer meets the road. Or maybe life in the Fanta lane?

In an experiment Caltrans hopes will one day make California’s roads more durable and put a dent in the state’s growing plastic pollution problem, road crews working with the transportation agency are repaving a section of highway in Northern California using recycled asphalt held together with thousands of melted plastic bottles.

The project — across three lanes of Highway 162 just east of Oroville in Butte County — represents the first time a state highway in California has been repaved using 100% recycled materials.

“We are always looking for innovative solutions,” said Caltrans spokesman Gilbert Mohtes-Chan. “This is something we are exploring to see what the potential is.”

Crews are putting the material over 1,000 feet of roadway as part of a larger $3.2 million job to repave about 3 miles of the highway.

Here’s how it works: Caltrans already recycles old pavement in some highway jobs. Workers with heavy machinery scrape 3 to 6 inches of roadway surface and grind up the old asphalt, then mix it with a binding agent made of bitumen, a type of tar-like sludge left over from oil refining.

The problem is, that material is only strong enough to form the road base. New hot-mix asphalt must be trucked in from a plant to build the top layer of the road.

With the experimental process now being used in Oroville, crews grind up only the top 3 inches of old pavement and mix it with a liquid plastic polymer binder made largely from used plastic bottles. The bottles are typically PET plastic, commonly used in soda and bottled water, Mohtes-Chan said. Paving one mile uses up about 150,000 plastic bottles.

The new plastic-asphalt is then placed on the top of the roadway and is durable enough to last two to three times as long as traditional asphalt, tests have shown. Because the new mixture eliminates the need for double layers, hot-mix asphalt doesn’t need to be hauled in, saving dozens of truck trips, reducing smog and greenhouse gas emissions.

The process was developed by TechniSoil Industrial, a company based in Redding.

It’s not the first recycling innovation Caltrans has tried. The agency also uses crumb rubber from old tires in some paving jobs. Although plastic-based asphalt has been used on highways in India, the Netherlands and other parts of the world, it has only been used in a few projects on surface streets in Los Angeles and San Diego.

The plastic-asphalt looks like regular asphalt, only with less steam during construction. It’s ready for cars in a few hours.

Caltrans officials plan to conduct detailed studies on the plastic-asphalt section of the Oroville road, which cost about $90,000, to compare everything from cost effectiveness to wear-and-tear with traditional road surfaces. If it works well, it could be coming soon to other roadways.

“We’re excited about introducing a new sustainable technology and helping pave the way for recycled plastics throughout the state,” said Caltrans District 3 Director Amarjeet S. Benipal. “This process is better for the environment because it keeps plastic bottles out of landfills and helps reduce greenhouse gas emissions and reliance on fossil fuels.”

Californians used more than 12 billion plastic beverage bottles in 2017, according to the state agency CalRecycle.

The state has a growing plastic pollution problem, with millions of pounds every year ending up in landfills, as litter along roadsides and in the oceans, where it breaks into tiny pieces and harms marine life.

But environmentalists aren’t rushing to embrace the new technology yet.

Some have raised concerns about the roadway leaching bits of micro-plastic into the environment, something TechniSoil Industrial says does not occur in testing. Skeptics also say it may not be the best use for PET plastic.

We have no objection to a pilot project for recycling plastic beverage bottles,” said Mark Murray, executive director of Californians Against Waste, a leading recycling advocacy group. “But these PET bottles currently are being successfully recycled in California into other bottles, and have a very high demand.”

Murray noted that about 75% of plastic beverage bottles — which have #1 on the bottom of the container — are recycled statewide, a higher rate than glass bottles.

Instead, an asphalt process that used other types of plastics  — like #3, #4 or #5, which have very low rates of recycling — would be a better fit, he said.

“But,” he added, “it’s always a good idea to experiment so that we know what our options are.”

Road crews use an experimental type of recycled asphalt bound together with liquid plastic from old beverage bottles to repave Highway 162 near Oroville, Calif., on Thursday July 30, 2020. (Photo: Caltrans)